Sunspot #2305 ~ Imaged in a series of shots taken a few minutes after my previous post.

This shot seems a little more in focus and better contrast.
Keith 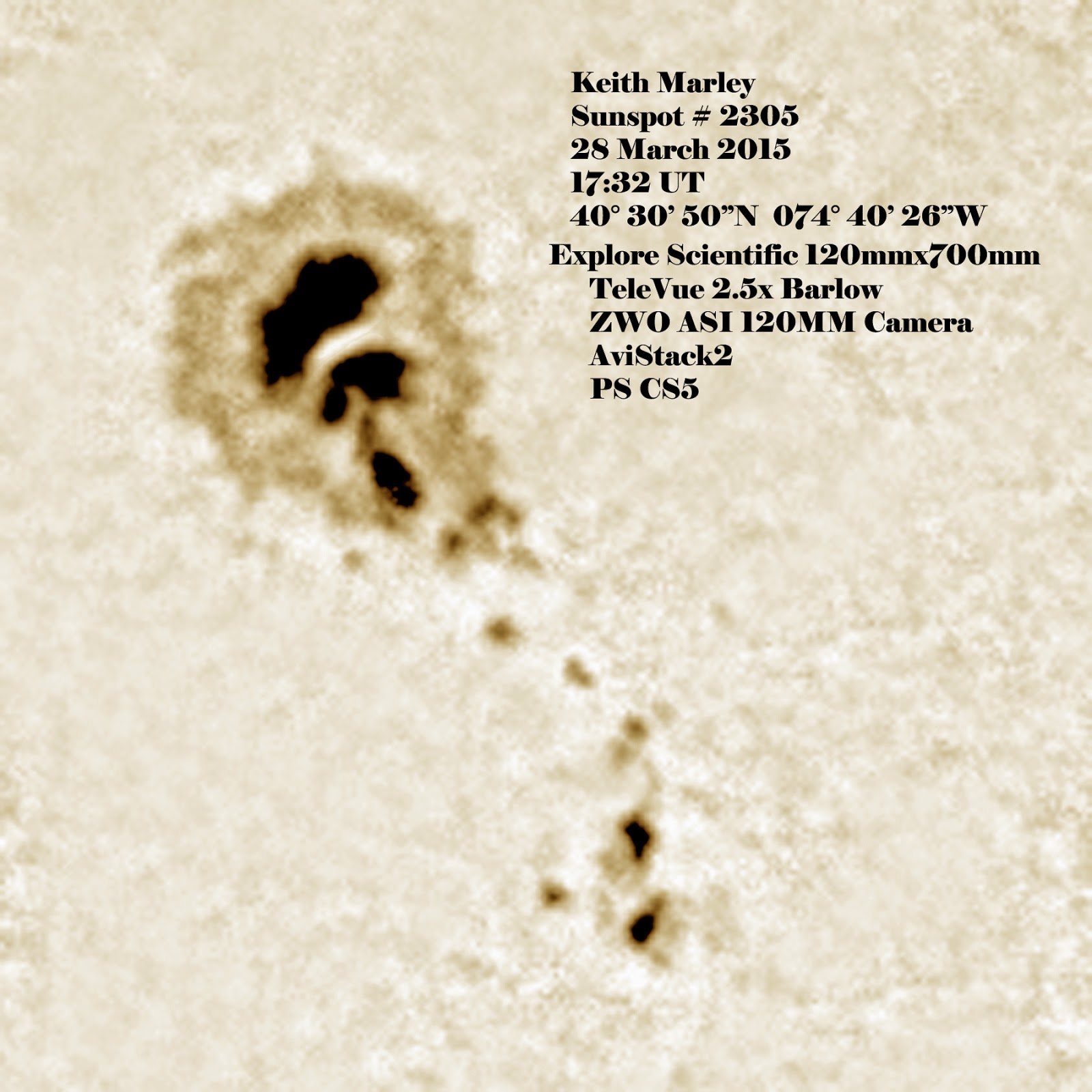 Although the weather prediction for today was snow/sleet later the morning was bright and clear, allowing me to get a quick shot of the largest sunspot on the solar surface ~ #2305
The temperature was in the low 40's so the air was only moderately unstable.I took many sets but this is the first image of them, so I may have a sharper image of this sunspot later.
I also took a couple sets of Sunspot #2313 which was much smaller so I might include it later as well.
Keith 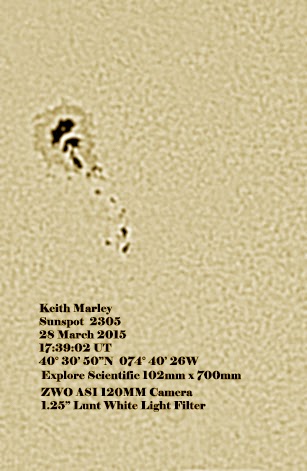 There is a new naked-eye nova in Sagittarius...

Taken from Sky and Telescope


A 6th-magnitude nova erupted inside the Sagittarius Teapot on March 15th. It's in easy range of binoculars just before dawn — and still brightening.      Link to S&T Article

Update Thursday March 19: The Nova has brightened to about magnitude 5.2, more than a half magnitude brighter than it was at it's discovery. There's no telling when it will stop. The nova is right on the midline of the Sagittarius Teapot. The horizon here is drawn for the beginning of astronomical twilight in mid-March for a viewer near 40° north latitude. The nova is about 15° above this horizon. Stars are plotted to magnitude 6.5. For a more detailed chart with comparison-star magnitudes, see the bottom of this page.

You never know. On Tuesday, March 15th, nova hunter John Seach of Chatsworth, NSW, Australia, found a new 6th magnitude star shining in three search images taken by his DSLR patrol camera. The time of the photos was March 15.634 UT. One night earlier, the camera recorded nothing there to a limiting magnitude of 10.5.

Before and after. Adriano Valvasori imaged the nova at March 16.71, using the iTelescope robotic telescope “T9” — a 0.32-m (12.5-inch) reflector in Australia. His shot is blinked here with a similarly deep earlier image. One of the tiny dots at the right spot might be the progenitor star. The frames are 1⁄3° wide.

The Spectrum taken a day after the discovery confirmed that this is a bright classical nova ~ a white dwarf whose thin surface layer underwent a hydrogen-fusion explosion ~ of the type rich in ionized iron. The spectrum showed emission lines from debris expanding at about 2,800 km pr second,

The nova has been named Nova Sagittarii 2015 No. 2, after receiving the preliminary designation PNV J18365700-2855420. Here's it's up-to-date preliminary light curve from the American Association of Variable Star Observers (AAVSO). Here is the AAVSO's list of recent observations.

Although the nova is fairly far south (at declination -28° 55' 40", right ascension 18h 36m 56.8s), and although Sagittarius only recently emerged from the glow of sunrise, it's still a good 15° above the horizon just before the beginning of dawn for observers near 40° north latitude (i.e. New Jersey ~ Keith). If you are south of there it'll be higher, if you're north it'll be lower.
Binoculars are all you'll need.

To find when morning astronomical twilight begins at your location, you can use our (S&T's ~ Keith) online almanac. (If you're on daylight time like most of North America, be sure to check the daylight-Saving Time box).

Below is a comparison-star chart from AAVSO. Star's visual magnitudes are given to the nearest tenth with the decimal points omitted.

Okay, great!
Let's try to get some imaging of the new nova....
Keith Marley

I went outside this morning at 4:30 (31°F) to find Saturn for the first time this year and I was not disappointed.. The rings appear almost fully exposed (except for a small portion still covered by the planet) and extremely tilted.
Look for it at this time in the south, just northeast of Graffias, the northern star of the three stars in the head of Scorpius.
Graffias is also a nice double ~ check it out.
I was not prepared to take pictures today, so I only looked for a  few minutes.
Try to get some photos of the planet while it is still cold.... I'm sure you won't be disappointed either.
Keith

Just when you thought it was safe to post.....

Ok, I give up!
I promise I won't complain anymore about the sun's misbehaving.... right after my last post regarding the lack of sunspots, "Ole Sol" gave us a treat.... #2297
Hmmm,  maybe I should complain more if it means sunspots like this. 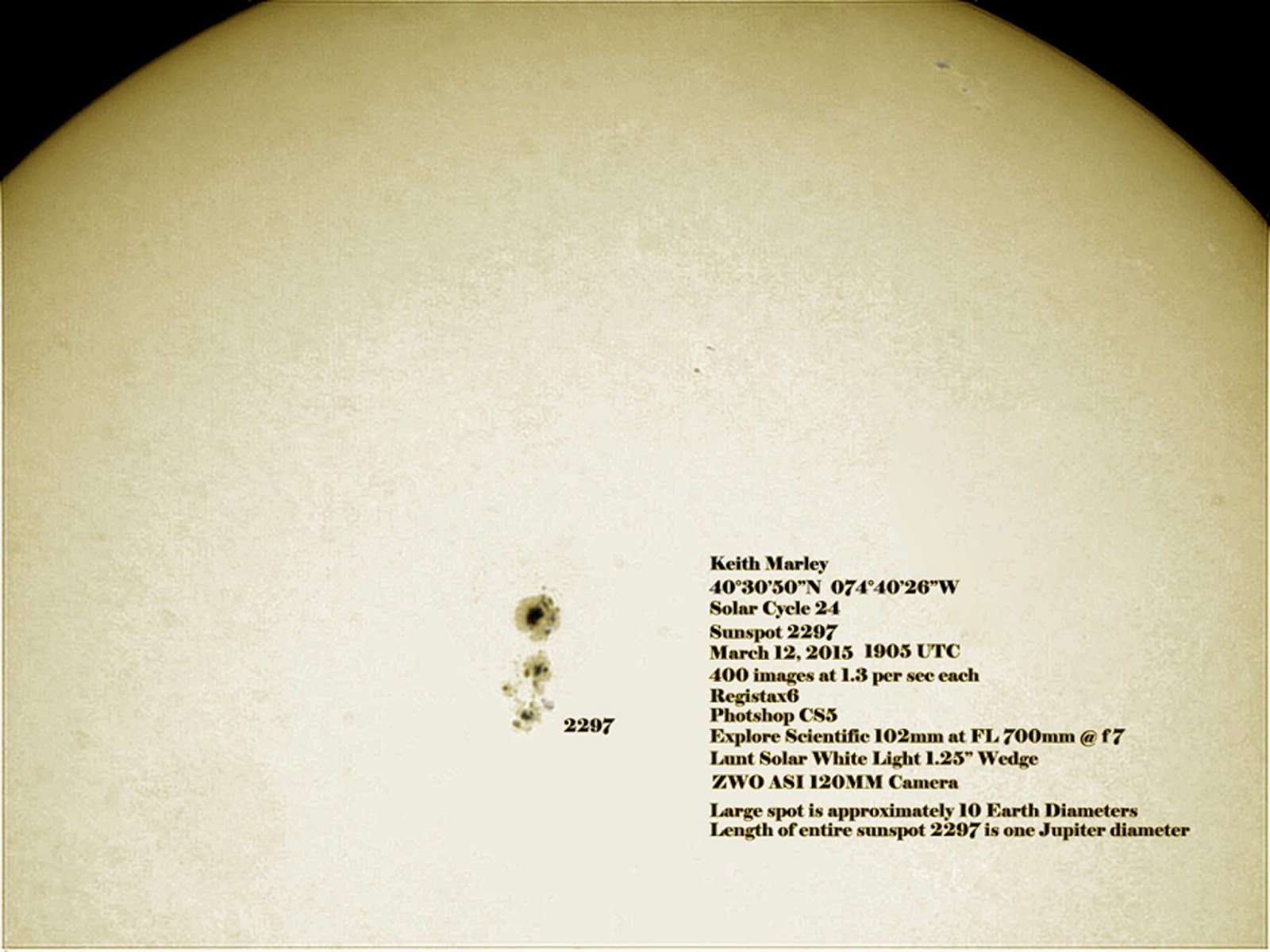 As noted: This is Sunspot #2297 and the Large spot is about 10 Earth diameters while the entire sunspot system is about one Jupiter diameter.
Keith
Posted by NJAA Blog at 5:04 PM No comments:

I've been watching the sun whenever the weather would clear enough for me to get my little solar scope out for a quick peek... and all I see is yellow!
Very few sunspots seen these last few weeks and the ones that I saw were relatively small and unimpressive.
But I couldn't take it anymore so I got the camera out anyway to take a few sets. Each set was over 5000 images, while only 500 were usable... another unsettled daytime sky!  But I wasn't happy with the effort made ~ I got as good an image using my Galaxy S5 over the eyepiece! 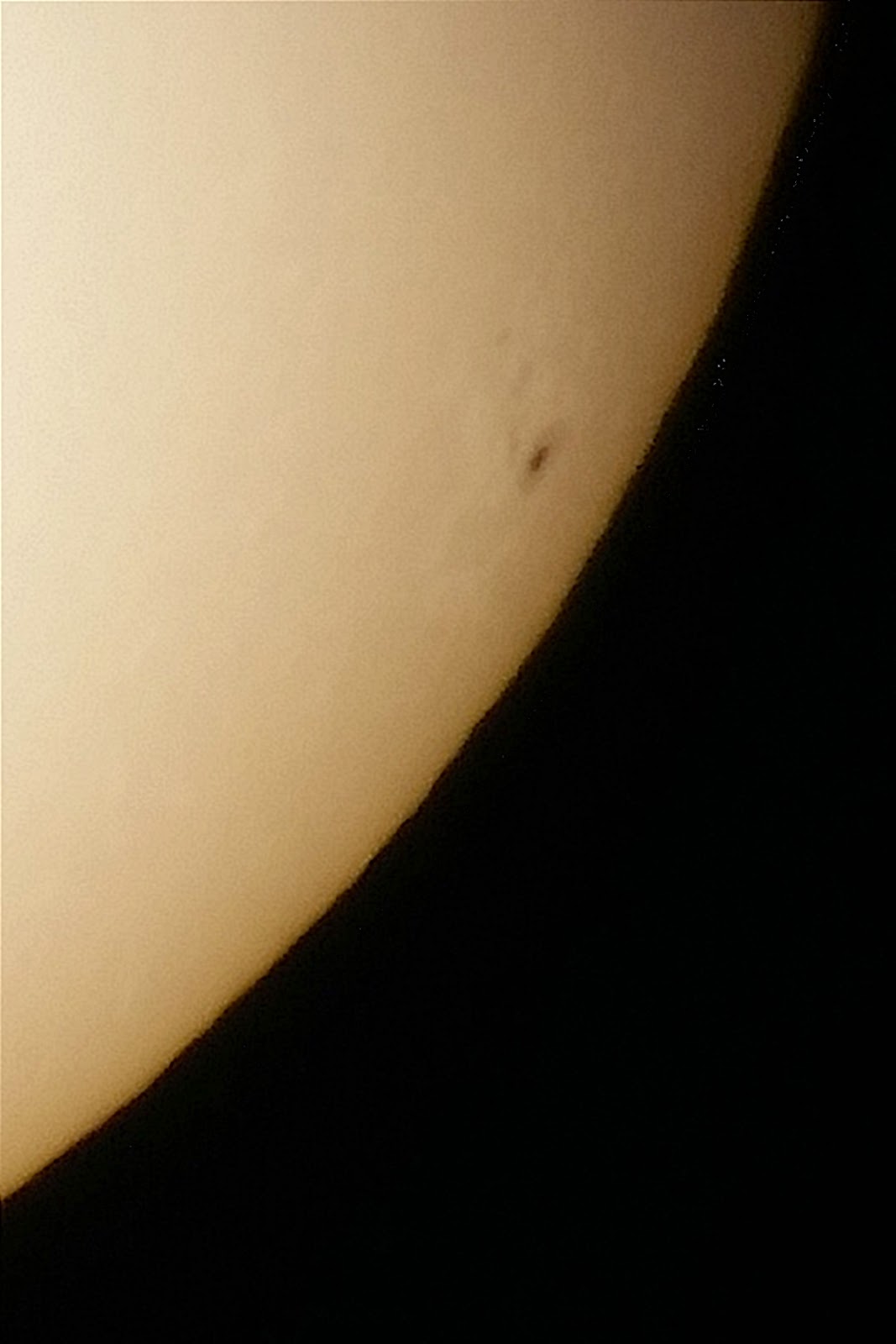 Pssst ~ past it on: "Go outside and take pictures of something in the sky"
Keith
Posted by NJAA Blog at 10:42 PM No comments: