The Total Eclipse was fantastic!!!

About two years ago I called my childhood friend of 60+ years to tell him to put August 21, 2017 on their calendar. I was going to stay at his place for three or four days. Then because he was also into astronomy while we were growing up, I told him why ~ the best total eclipse of our lives was going to be centered about twenty miles from his house south of St Louis! As kids we saw the sun with a huge chunk missing during the June 20, 1963 eclipse as it passed near the Montreal part of Canada.... since then viewing a total eclipse was on my bucket list. This was a gimme!

During that time we planned everything possible, including scouting and confirming four or five sites within about 200 miles west of his place should the weather get bad for the eclipse.  Many local schools on the center path would not let us on their property to set up photography equipment and telescopes during the eclipse ~ it was on a school day.  I even told Principals that I would offer my experience as a member of  NJAA and a trained volunteer for Project Astro... respectfully they declined my offer. I think I was just asking too early.
Undeterred, I set out plotting places like state and local parks. Some wanted entry money and all warned me that I could expect huge crowds there.... ugh!!! But we had a plan, even if I had to park next to a gas station!.

Time went by fast and about a month  before the big day I got a call from my buddy. He asked me if I was married to the places we came up with so far. I got an uneasy feeling in my gut... was he going to tell me something came up and I couldn't stay there?

Instead he told me his daughter had a girl friend that lives on a farm and we could go there and view from within it's open spaces. He gave me the address and as soon as I could I looked it up on Google Maps ~ Wow! ~  We were going to be almost on top of the eclipse path dead-center as it wizzed through DeSoto, Missouri!

That made the rest of my month exciting. My only real concern was the history of the weather near St Louis in August. All data showed about 50-70% chance of rain was likely. Ok, so we still had our back up plan. The night before the eclipse the TV said there were 70% chance that it would rain so we packed up his truck and decided to take the chance with the farm in the morning.
When I woke up, I immediately got my Radar App going on my phone. Oddly enough all the clouds were gone and the radar showed nothing in the sky where we were going. Now we had to deal with the traffic... it's always something!
We headed out early for the half hour drive expecting it to become hours. Instead, we were lucky as there was only moderate traffic out of St Louis, so we got to the farm early.

After the introductions, I was told that about 15 other people were expected to come there as well... totaling about 25, including the kids and two dogs. Soon after I set up my new iOptron SkyTraker Pro and camera I relaxed. Having heard all the professional advice warning every "newbie" to take time to enjoy the changes in the environment and not bury their head in a camera, I decided that I would minimize my shooting to sense the moment as our spot had about 2 minutes and 40 seconds of totality and I was going to use it all!

I did take a few shots of the partial but I wasn't happy with the results as I couldn't seem to get a sharp focus on my Nikon's live-view screen. What I did want to get was the Corona and the "Diamond Ring". Then just before totality I noticed the security lights were on, the roosters were crowing, the temperature dropped, the bull was uneasy, and a cricket or two decided to join the fun as the dark shadow swallowed us up. The kids and adults were cheering and clapping as well as murmuring during the awe of the moment.

I have checked it off of my bucket list and here is what I took. 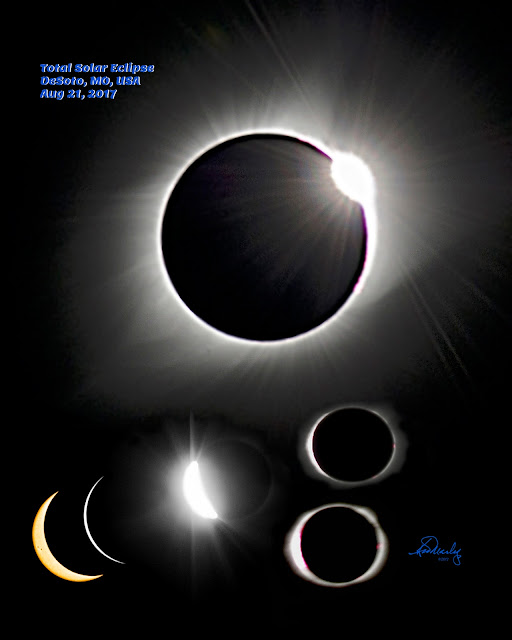 Luna 1 & Luna 2 are operational at this time.
The Covid-19 Pandemic has hurt many people, including astronomers. However, the one thing amateur astronomers are very good at, is being outside ~ alone, in the dark. Then later, often working many hours inside (again, often in the dark) during post processing of any images he takes. With the weather getting colder, it is always an ideal time for learning to use a new scope, mount, camera or just looking up, for deep sky objects that you may have not seen in a while. This is the time to explore outside our galaxy! So, dress warm and get outside in the fresh cool air and start imaging or at least looking for that new sight that you may not have seen before. For instance, closer to home, the 21 December 2020 conjunction of Saturn and Jupiter is one of the rarer events that occurs only once or twice in a person's lifetime. Plus, this is "Galaxy Season".... enjoy it!!!
Also Luna 1 and Luna 2 are calling for you!
Now that our park has reopened, although NOT to the public, members can use the observatories. Please remember to keep personal distancing a priority and wear a mask..
As a strange by-product, the sky seems cleaner and clearer as the volume of New Jersey highways have experienced less vehicles than anytime in recent memory. Even though the bazillion forest fires in California have definitely added to the high altitude haze, otherwise clean air and cool nights mean still great observing and more inviting for our member astroimagers. Especially those of us that use narrow band filters to cut through any remaining ambient light pollution. As temperatures fall the various temperature cells between you and the planets in space will seem to be steadier... but the stars still twinkle ~ an indicator that the sky is still unsteady. New Jersey is not known for it's great seeing, but video cameras will help get the best planetary pictures possible after stacking from thousands of short exposure images. Also, try something new like imaging before dark ~ the reduced contrast makes some interesting planetary pictures. Venus' crescent shapes stand out better in the low contrast sky.
As the weather gets colder, be sure to drink a lot of water ~ and of course wear layers to be comfortable.
The 5" Tak telescope in Luna 1 is now totally automated, with the roll-off roof now motorized. Special training for our members is ongoing and producing great results.
The Celestron Edge 14" telescope in Luna 2 is working well and is a pleasure to use. If you aren't trained for it yet just ask. We'll be happy to teach you.
The Celestron 11" telescope in the Schirra Observatory is currently down for repairs!
We want all members to be able to use other available equipment, including the roll-out Celestron 8" Edge and C9.25" scopes in back ~ which are also great for imaging planets and the moon as well as the various types of things within the galaxy.. The novice as well as experienced amateur's can find numerous and various size Dobs (up to 12") handy for quick observing.
Also, this is excellent time to use the Solar Ha scopes during the day. Although the surface sunspots seems to to still be down considerably, considering the sun is coming out of it's minimum cycle now, occasional larges sunspots and prominences may still be impressive in this wavelength. We now have three great Ha specific scopes as well as various white-light filtered scopes.
Finally, remember that the club has a number of excellent loaner scopes (including a go-to) that you can take home for a period of time to learn and practice on.
Take pictures and share your images with the NJAA Astro-Photography blog. Contact Keith at KRMarley_1999@yahoo.com
Also, the NJAA Library has a number of excellent astro-imaging books for loan, free to members in good standing.
The link will be on the NJAA website home page or ask a QO on duty for help (check the website calendar for public/duty days www.njaa.org) or Contact Keith at KRMarley_1999@yahoo.com for library questions.

The Astro-photography/Research meetings (currently and until further notice, all member meetings will be conducted on ZOOM. Member requests to be included ARE AVAILABLE ON THE ASTROPHOTOGRAPHY PAGE ON THE NJAA WEBSITE) are held at the observatory on the first Friday of the month at 8:00pm. All members are welcome to attend. Confirm the dates on the club's website calendar (www.njaa.org).