The Night Sky at Sedona, Arizona May 2016

While I was on vacation in Sedona last week I tried my hand at photographing the Milky Way, which I never did before for some reason.
I arose at three AM and drove to a desolate dark site. My plan was to go to an open parking space some miles away from a local town that I saw during a day hike into the hills..... but even after my second trial car trip to find some landmarks that would help me locate the site, I failed.

It is VERY dark out in the desert during the early morning!! So dark that I couldn't find a single landmark. I decided not to waste any more time so I went back toward town where I knew of a couple open sites just outside of town . On the way I discovered an open parking lot next to an electric substation, so I pulled in and set up for some southerly shots that included Mars and Saturn. I was literally 200 yards from the main road but there was very little traffic. Even with decent lighting restrictions there is still quite a lot of ambient light coming from the towns ~ most of it doesn't go up into the sky though but it is surprising how far it travels laterally.

Mars is spectacularly bright and very orange and Saturn is also very noticeable in such a dark sky.
Unfortunately by the time I started getting fairly good exposures it was approaching Nautical then Civil Twilight with it's deep blue sky creeping into my shots. I did trial and error for a while before I remembered that my camera is an APS sensor so I kept getting streaks until I figured out what I was doing wrong ~ to photograph the night sky, the 500 Rule states that you take 500 and divide your lens focal length to get the exposure time. As I was using an 18mm fl lens that would give me about 27 seconds.... opps! Then I calculated the 1.5x that my APS sensor required and I found that I should really be exposing at only 18 seconds! BIG difference and it shows. 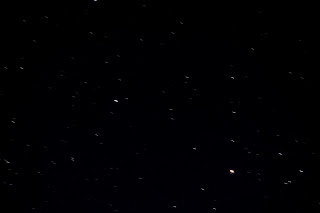 Then I got it at 15 seconds, rounding down to be safe with the shot below: 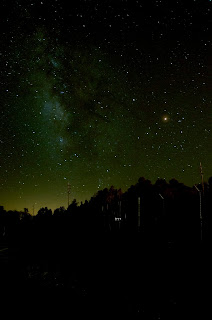 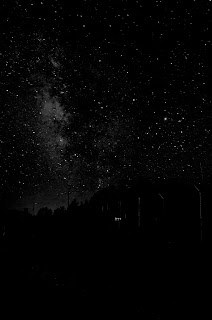 Here I annotated the image taken later as twilight grew: 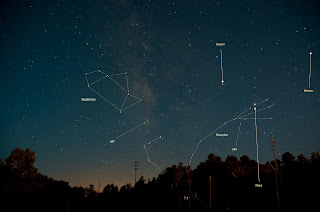 In this twilight image below you can easily see the red color of the town lights on the Courthouse Butte and beyond. The town was a few miles away from it and my eyes couldn't see any of that light at all.
I am not happy with the low light results from this Nikon D300 camera but to be fair I may have to try to set it differently: 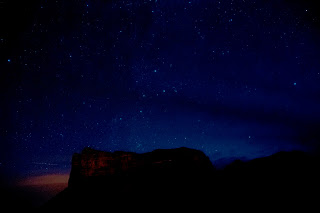 The Big Dipper visible to the upper right of Cathedral Butte and again the red light from the town: 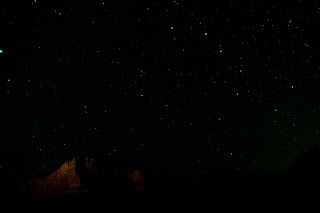 So now, after this first attempt I think I will adjust my camera for less noise and try again ~ I still need to improve my results.
What spectacular clear and dark skies. I can't stop thinking about what I could do with my telescope there.
Keith