I see Sunil Abrol has begun his astrophotography endeavor. Last Nov 3rd 2018 he took this image of Andromeda using a Nikon5300 and a 300mm lens at f5.6 on a Celestron. But he was having a lot of computer issues which caused his delay in sending the image to us.
Apparently he had to change some equipment to get the processing speed he needed, so he added memory 4 gigs more to his MacBook Pro, giving him 8 Gigs total. However that wasn't enough so he replaced his HD with a 500Gb SSD.  Then he got started again on the image and sent it to us.
He thanks Max Pike and the Research Group for helping him get started and Vlad Alexandrov for mentoring him through the scope-guidance process.
It's a big step for everyone to get their first image under their belt ~ nice photo Sunil, we're looking forward to some more clear skies so you can add to your skills. 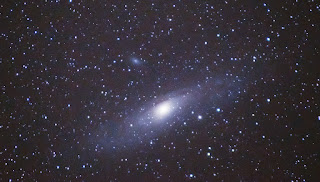