I recently purchased a duo-band Ha-Oiii filter. It was installed on a STL4020cm one shot color camera and used with the telescope at St Joseph HS observatory in Metuchen, NJ where the light pollution yields an SQM of 18.3.

Images were tried of a star cluster, a galaxy and a planetary nebula ~ M97.
Only the latter came out well.

Club members with DSLRs or OSC cameras might want to give this approach a try.

Thanks for the heads up Al.

I also read in the current Sky & Telescope that Lumicon has released their "new and  improved" Generation-3 Oiii filter.... and the price seems right too ~ $100 for the 1.25" version and $200 for the 2 inch! Here's Al's image using the impressive duo-band Ha-Oiii filter.   - Keith 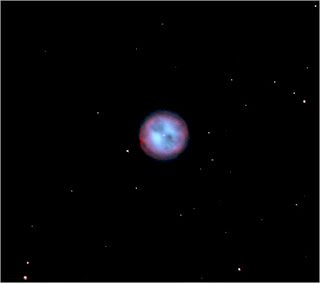